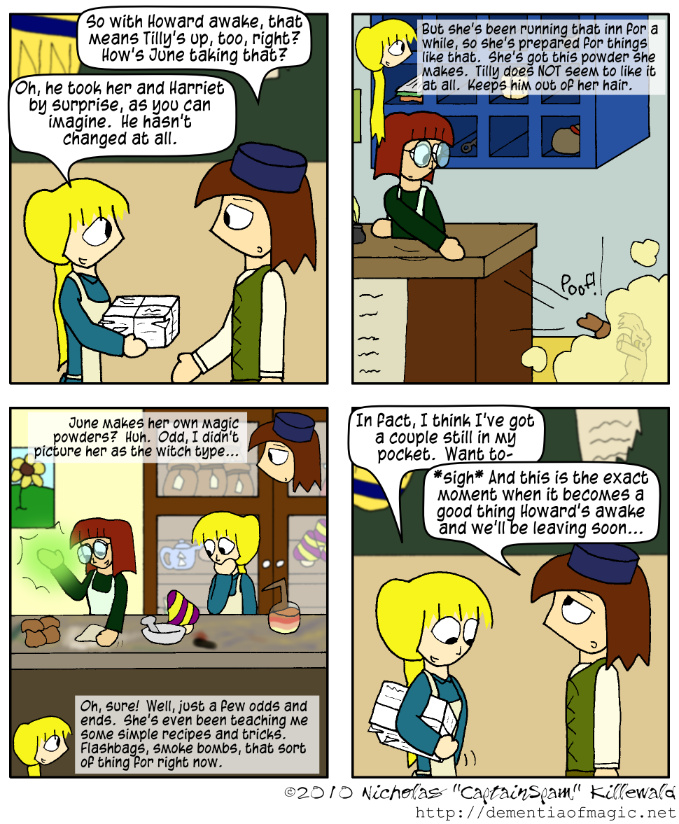 A bit of definition may be in order.

In a world where magic not only exists but is fairly common, like the world of the comic, it becomes necessary at times to discuss various practices of magic in ways that separate them from other practices. Or, in other words, what areas of magic a given person studies and practices. This can be considered analogous to the many varied practices of computer scientists in our world. The software engineer is frequently a different sort of person than the network administrator or webmaster, for instance, and this would go a long way in explaining why your software engineer friends roll their eyes and mutter curses at you under their breath when you ask them to set up your website.

However, in terms of magic, the choices of terminology society has devised over time can be confusing to the outside viewer, who can, in some cases, reasonably be assumed to live in a world where far fewer forms of magic exist at any given time, down to and including zero. Worse when some of the terms may conflict with what is otherwise known to us, or when terms seemingly synonymous to our ears suddenly have distinct meanings. The terms "sorcerer" and "enchanterer", for instance, may be largely similar to us, but in the DoM world, they mean two distinct practices of magic. Again, parallels can be drawn to the computer science world and the terms they use among themselves, and, in fact, may be particularly apt in this case, as most people seem to view what computer scientists do as black magic anyway, and they thus fear them, as well they should.

To that end, Matt was surprised to hear June was, by his term, a "witch". This is not at all out-of-place; a witch (masculine form "warlock") in the DoM world simply refers to someone whose magic talents lean towards the study of magic powders, potions, elixirs, and similar things. The powder June is using to annoy Tilly away from her, for instance, is a product of this. Stephanie, in fact, could be considered to have some amount of witch nature in her, given her development of the advanced ice rose poison back in chapter two. If you want to get really really far back in the archives, you may even recall Quertia the witch.

Why this surprised Matt was that June is, by immediate evidence, a dollmage, much like Howard. Dollmagic is, for all intents and purposes, a subclass of enchanting; that is, magic by spoken incantations. All direct commands that dollmages give their dolls are such spoken words. However, Matt is just a bit confused, not being a mage himself. It is fairly common for mages of all walks to study things outside their usual practices. It helps to diversify.

To round it out, the sort of spellcasting Alex tends to lean towards is sorcery, a more open-ended form of magic heavier on concentration and gesture. This tends to be the most commonly-practiced, as it does not require an on-hand supply of ingredients to use, nor does it require the caster to interrupt his or her train of thought to speak incantations.

Of course, all three are more complicated than what has just been described. It takes more than just putting ingredients together to be a witch/warlock, the magic words enchanterers/enchantresses use cannot normally be pronounced by mortal tongues, and sorcery is far more than putting your hands in the right place at the right time. And, there is a large amount of crossover between the various practices, different sub-studies under each, and all sorts of weird twists and such which I'm not going to go in to. Besides, if it could be explained to us perfectly, well, it wouldn't be magic, now, would it? And this is really more a vocabulary review, not a science lesson.

As one final note, no smart remarks about Alex's current outfit actually having pockets for once.