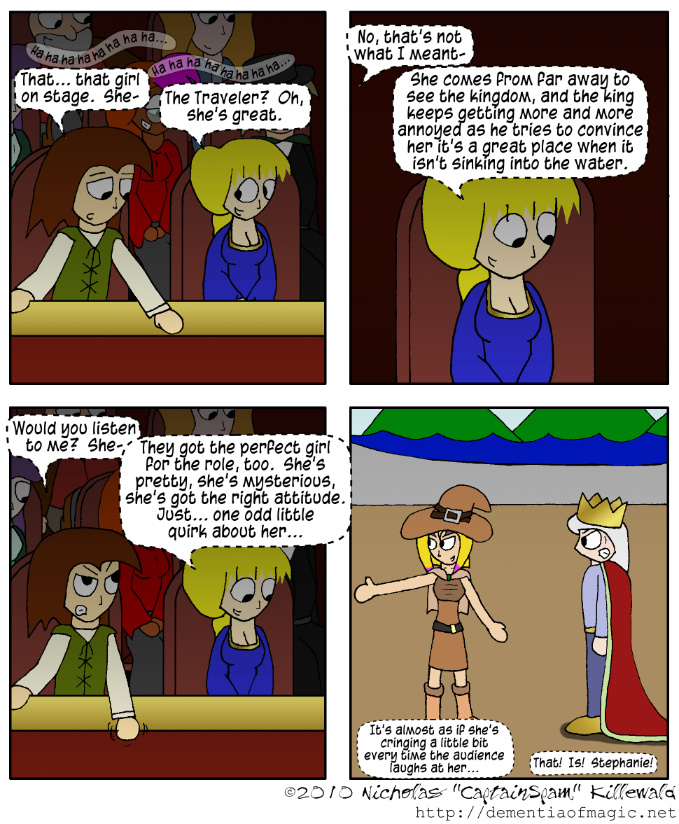 As mentioned at the start of the chapter, there are several foreign characters who come to the Arabaz Kingdom. They all, in their own way, serve as straight men to the absurd desperation of the main royalty and nobility in the castle (as well as one greedy page who sees this as nothing more than an opportunity to move up the social ladder). This particular scene features a visit from The Traveler. The character, much like the other visitors, was never given a name in Herman Teriak's original script. In fact, the gender of those characters were never given, either, as his intent was to showcase them as ordinary people, allowing anybody with the right attitude and acting talents to take on the roles. Herman's plays frequently featured open-ended casting and improvised sections like this. Some of his critics would also call attention to some of the larger plot holes he tended to gloss over, such as how these visitors made their way to Castle Arabaz in the first place and why, for instance, The Traveler seems surprised to find the king there, when it should be pretty clear that, even submerged, this is a castle, after all.

The Traveler's role, specifically, largely serves as the foil to the more patient and diplomatic Explorer in the previous scene. She (let's just assume the part is female for now, just for simplicity's sake) is generally more sarcastic and snide in her dealings with the king, and very little information is given as to who she represents, be it another monarchy, some other government system, or if she just represents her own purposes. The choice of Stephanie for the part in this production is nearly perfect; not only does she fit the mysterious appearance needed, The Traveler's main angle, after seeing the state of the castle, seems to be to annoy the hell out of the king for her own amusement, a role which, of course, Stephanie is more than delighted to play.