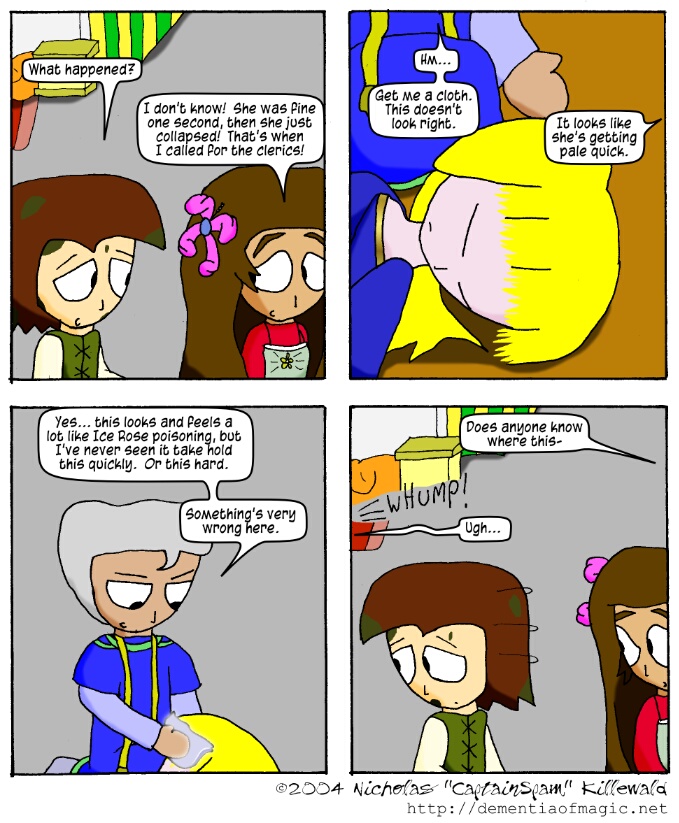 The Ice Rose was glossed over at the beginning of the chapter. In more detail, it is a plant that grows only during Perfect Equinox. It gets its name from the icy appearance of its petals and its cool temperature to the touch.

It is not advised to touch the Ice Rose, however, as the petals contain a very powerful poison. Said poison also grimly contributes to the name of the plant, rendering its victims unnaturally pale and cold as it works its way through the body. Under normal conditions, the poison takes somewhere around a week to run its course, killing its victim in the process. Recovery depends on how quickly a cure can be administered, and can run anywhere from a few days in bed with dizzy spells to an almost paralyzing exhausted sensation for weeks.

Given the predictable seasonal growth of the plant, King Landis always has a full staff of clerics on-duty at the Festivalgrounds. In addition to their normal duties, during the Perfect Equinox Festival, the clerics are also expected to have a supply of antidote for the Ice Rose poison on hand at all times. Sabatoge involving the poison or the plant is not uncommon during this time, and the kingdom has to be prepared.

Also, the cloth that the cleric in this comic asked for is an standard enchanted clerical cloth. These cloths have a magic-repulsive and sanitizing aura around them (not unlike a moist towelette), making them ideal for handling things otherwise infectuous or cursed. They're far from perfect, but they sometimes get the job done.

It would have most likely taken weeks to explain all that in-comic. But like this, we can jump back to the plot right away, right? Right.