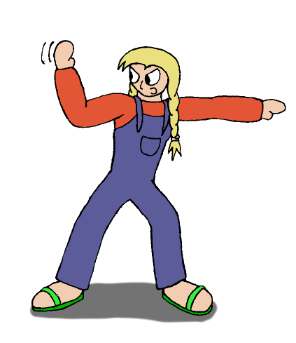 Let's think about this for a second. The Breznial Kingdom, owing to complete apathy by the governing council and ostensibly the queen, is renowned for being a haven of criminal activity. Travel through the nation is strongly discouraged both by internal and external advice. Violent crime is rampant, both in turf wars and against anyone unlucky enough not to be part of a gang. Tourism is relatively low. What sort of person do you think is going to be the head of this kingdom's largest gang?

That's right, it's going to be someone like Ethyl. A huge, brutish thug of a woman. Someone vicious and violent in her ways, in command of many similar thugs of similar ways. And smarter than she looks, too; when you're number one in a situation like that, brute force alone won't protect you from a knife in the back from any of the potential number ones around you, nor will it discourage all your number greater-than-ones from supporting the potential number ones. She's smart enough to know what her gang can and can't pull off, how to avoid overworking them to the point of mutiny, and to not test the patience of the full might of neighboring armies.

So just remember that next time you think it'd be fun to be the head of a crime group. It's a lot more responsibility than it looks.