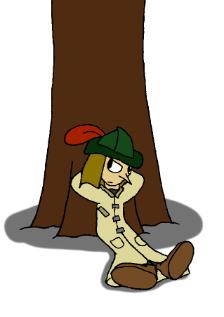 As it turns out, there actually IS honor among thieves. Don't let anyone tell you different. It's just that it requires said thieves know each other and be good friends first, which is sort of where the actual meaning of that saying starts going off the rails. Regardless, Jacob has been a good friend of Matt's for most of their lives.

Diminutive in stature, quick on his feet, and maybe more than a bit snide in nature, Jacob makes for an ideal thief. He taught Matt most of what he knows about thievery, and the two of them routinely go out on jobs together in the more affluent towns and ports in the kingdom. In a certain sense, he can be considered to Matt what Salthalus is to Alex, with the slight exceptions that Jake is around the same age as Matt and, owing to an unfortunate combination of his short patience and repeated accidents when she was first learning magic, he does not get along well with Alex at all.