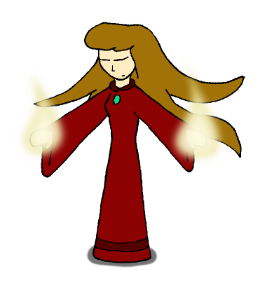 To be honest, if you lived in the Healing Springs area, you'd be hard-pressed to find a reason to leave. After all, it's a scenic place, the people are generally friendly, the area is relatively wealthy, it's not under monarchical rule, and it's popular for entertainment. Sure, if you had a distinct fear of heights or wanted actual farmable land, maybe then you'd want out, but most people want to live there and few want to leave.

Sadly, Salthalus didn't really have much choice in the matter. Once a member of the Healing Springs Senate (properly: Lady Salthalus; she prefers to put that behind her nowadays), she now lives in the Landis Kingdom after the incident with Marzos. After stopping and imprisoning him, everyone involved figured it best to leave the Springs to reduce the chances that any of them could accidentally free him. Turned out that actually didn't help, but that's where her life took her.

Part of the reason she helped stop Marzos in the first place is her incredible knowledge of magic. Indeed, she is one of the wisest and most powerful mages in the known world. And in Landis right now, she puts her knowledge to work teaching her pupil, Alexandria. She's taught Alex from a young age, owing to a somewhat complicated story involving Alex's childhood friends, the other people in the village, and maybe a bit of cabin fever-induced poor judgment. Regardless, Alex is a good student, and Salth is proud of her.

Due to a slight issue with the local village population (a long story of which the aforementioned complicated story is a part), Salthalus generally keeps up a very weak magic disguise to slightly mask her advanced age. This spell is quite incredibly weak, really; it'd only fool people with nearly no experience with magic, even second-hand. Alex's brother Matt, for instance, can see through it trivially, but most of the villagers can't. Again, long story.

All in all, after a rocky start, Salthalus's new life turned out to be working out well enough, right until she learned that Marzos somehow got free...