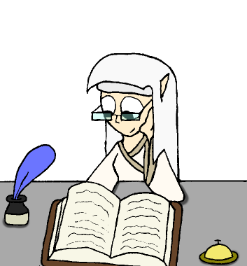 There's a sort of stereotype most other races hold of the forest elves. Due to their long lives, sometimes haughty opinion of their own culture, and pride in traditions that stretch back longer than entire other races have even existed, most elves are seen as slightly stuck up, xenophobic, and old-fashioned. The actual attitudes of most of them don't help matters much. This goes a long way to explain why humans and dwarves don't visit elf forests all that often, apart from the latter's dislike of climbing trees.

Fortunately, though, that IS just a stereotype. Mostly. If that were true of all elves, the beach elves wouldn't exist, nor would any elves choose to relocate to human towns and settlements. Like Phinn. She runs a library in the village where Matt and Alex live. She moved there shortly after the soul golem disaster in Yuulor. She's also one of the friendliest people in the village. Few can imagine daily life there without seeing her cheerful face.

Phinn is a somewhat nerdy girl. Shy, intelligent, loves reading, slightly socially awkward, that sort. Occasionally forgetful, too, frequently forgetting that most humans never studied how to read elven script. Though back in Yuulor, she also indulged in a small degree of wanderlust, enjoying exploring the forest and nearby lands with her friend Lucien. She just hasn't had the chance to do so much in recent years.

Nowadays, though, she'd much rather go exploring with Matt. She has more than just a slight crush on him. Matt remains just about the only person in the village unaware of this.