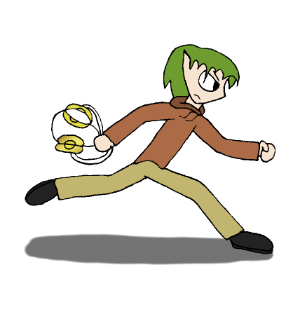 A while ago in Yuulor Forest, back before the soul golem disaster, Phinn knew a guy by the name of Lucien. The two were good friends for a long time, too, hanging out and enjoying exploring the deepest reaches of the forest together once in a while. But eventually, after the disaster, Phinn felt it best to move out of the forest and live in a human village to run a library. Phinn still holds Lucien in high regard, and occasionally gets letters from him, though the two haven't seen each other in ages.

That's at least all anyone knows from talking to Phinn. Anyone who's talked to Lucien since then would be quite hard-pressed to understand what she's talking about. Maybe something happened, maybe he changed over the years, but the Lucien people know today is a dark, dire elf who seems consumed with some all-encompassing quest that sends him across the continent, frequently to parts unknown, all for some shady objective he's not particularly open to discuss. Nobody's sure what he's after, where he's going, or why. He's had run-ins with Matt and Alex before; neither like him much, and with good reason, but Phinn continues to think highly of him.

Lucien's a strange person, too. Seems to always be on the move, looking for whatever next piece of whatever it is he's doing is. Nobody's seen him back around Yuulor in a while. Strong revulsion to magic script. And nobody can prove he's killed more than his share of people in his way, but most are convinced he has.