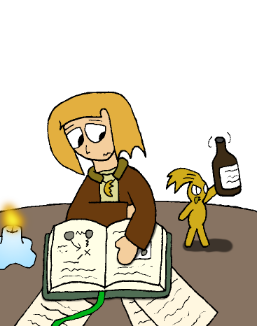 Your every day, garden-variety dollmage has chosen for him or herself a relatively unique life among mages. These people have decided, for any of a wide variety of reasons, to animate a doll to be sort of a familiar. The doll will, for the remainder of both of their lives, share a powerful bond with its master. This bond means, among other things that where the master goes, the doll follows. It also means destruction of the doll carries with it severe damage to the master's mind. These dolls will obediently follow any magic commands issued by their masters, and without any commands to follow, will revert to a personality defined by the environment in which they were initially animated.

With that, consider the case of poor Howard. He's a nice guy, maybe a bit shy. Grew up in the port town of Roslori on the Southern Peninsula. He took an interest in magic from a young age, but didn't have a mentor to help him. He was entirely self-taught by books he borrowed from neighbors and libraries. And, as foreshadowed by the first paragraph, he decided it would be a fun idea to animate a doll for himself.

Now, without a mentor, there were a few of the finer points of magic he didn't quite get the hang of right away. Chief among them was focus training to shut out the outside world so he can concentrate on spells. And, living in a busy port town, there was quite a bit going on to break his concentration. Because of this, when he was ready to bring his doll, Tilly-Willy, to life, he needed a good, quiet place to do so. In the end, he decided the best place was the cellar of a pub whose owner he was friends with. This brings us to another thing a mentor might have stopped to remind him of, the bit about the doll's personality being defined by its environment.

Howard expected the doll to take on the mannerisms of the pubtender. What he got was a doll that took on the collective personality of the patrons: An abrasive, chauvinistic, routinely drunk doll generally preoccupied with obtaining booze and leering at women. While he still snaps into an obedient trance when Howard gives him magic commands, those commands take some concentration, and Howard's got better things to think about. Like figuring out how to safely unanimate Tilly (quite a bit harder than animating him, it turns out). And apologizing for what Tilly does.

So Howard's effectively become a nomad of sorts, traveling from town to town, kingdom to kingdom, trying to study whatever it would take to shut up Tilly, usually leaving each town out of embarrassment from something Tilly did. It's been rough, but hey, a stay in Breznial found him crossing paths with Alex. The two of them seemed to hit it off well, so he's at least got that going for him, right?