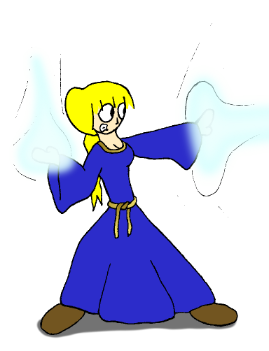 There are many mages in the DoM world. Alexandria is one of them.

And if there's one thing you can say about Alex and magic, it's that she loves learning about it. Always has since she was a little kid, in fact. Which was sort of odd; the small village in the Landis Kingdom in which she and her brother Matthew live had always been relatively free of mages until Salthalus moved in. But for most of her life now, Alex has been eager to seek out and learn new spells and techniques, both under Salth's teachings and otherwise. There's always more to learn.

Alex herself is a fairly ordinary girl. Generally cheerful, somewhat self-confident, headstrong within reason, that sort. And maybe just a wee bit hotheaded at times. More than a bit adventurous, too; she enjoys traveling around the continent when she gets the chance, and both she and Matt have covered a surprising amount of distant locations for a couple of peasant siblings. It's also been disturbingly more often than usual in recent times. But hey, that's how she wound up meeting Howard (and his doll), so it's not like she's complaining all THAT much.