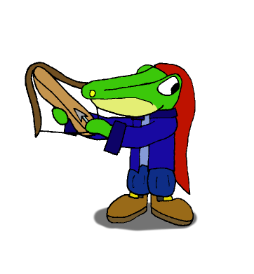 What do you do if a power-mad homicidal maniac inflicts your girlfriend with a fatal poison, one modified to be incurable by conventional means AND to take longer to kill just for the fun thrill of watching someone suffer? And what if all that was said maniac simply using your girlfriend as a guinea pig to make sure the poison killed as expected so she could use it for bigger and more deadly uses? Well, if you're Simon, you're not going to take that sort of thing lying down. You're going to avenge your girlfriend, that's what you're going to do.

Simon hails from one of the free towns on the southern coast of the continent. While his daily life before isn't really any of our business right now, that life changed when his girlfriend Marie was stricken with ice rose poisoning one Perfect Equinox. When the clerics couldn't cure her and she eventually (and painfully) succumbed to the poison, he found and chased a laughing Stephanie back to her grove. Stephanie, though, wasn't quite done having fun; she was ready and waiting for Simon, managing to inflict him with a spell that turned him into something like a humanoid frog.

While this amused her greatly, this still didn't stop Simon. After all, being a roughly dwarf-sized frog-person does have its advantages that Stephanie didn't really count on. He's small, he's quick, and he has amazing jumping legs. He also wasn't all that concerned about his looks; after all, Stephanie's most likely the only person who's going to see him until he's had his revenge, and hey, if he plans it right, maybe his face will be the last thing she sees. That and the head of a flying crossbow bolt.

Not to spoil anything, but let's just say that situation was resolved the next Perfect Equinox thanks to intervention by Matthew after Stephanie almost got away with poisoning a large chunk of Castle Landis, including Alex. Simon's gone home now, but, like I said, exactly what he did before and what he plans on doing now isn't any of our business. Not now, at least.

Not to say that'll keep Stephanie down, though.