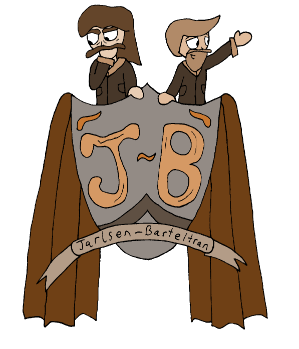 The Healing Springs area is well-known for, among other things, its entertainment district on West Spiral. Standing out among the various shows, games of skill, and shopping opportunities, however, is the headquarters of the world-famous Jarlsen-Barteltran Theatre Company.

The J-B is one of the oldest known traveling theatre troupes in the world. Although the company is relatively small and can only sustain one major show at a time, they are renowned for the acting talent of its regulars, their ability to recruit and integrate local talent for temporary parts, and their willingness to perform controversial plays (local authorities permitting), including the legendary forbidden play, The Sinking Castle. The J-B Theatre itself hosts acting and stagehand lessons when the main troupe is traveling, and whenever they return home, they perform for a packed house every night.

This generation of J-B performers have the advantage of the Theatre Orb, a device custom-made by the company as a magical/mechanical illusion generator. Many theatre companies keep mages on their payroll to add special effects to their performances, but the J-B constructed their orb as a way to more reliably generate these effects. Most agree this is a marked improvement, and the added benefit of allowing stagehands unfamiliar with magic to perform the effects saves quite a bit on finances.