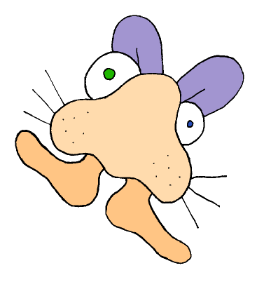 Any mage knows what a nasal fly is. Entirely miscast spells, incantations gone completely to pot, magic that simply went nowhere. Nobody knows exactly where the nasal flies came from or what inane joke of the gods these creatures are, but nasal flies are creatures of pure magic; specifically, miscast magic that goes nowhere.

Do note, "magic that goes nowhere" is a fairly apt description in this case. While it is common and potentially dangerous to wind up with a spell whose effects weren't what you were looking for, nasal flies are spawned into being in those certain times when a spell is just plain and simply completely botched to the point of not doing anything. It's one thing to propel a gout of flame in the wrong direction; it's another entirely to not even get the flame right, and get it so not-right that it's not really anything at all. For the more technically-minded, think of it more as a compiler error rather than a runtime bug.

From their behavior, nasal flies apparently have very little cognitive abilities. They simply fly around mindlessly until they reach the end of their lifespans, then they vanish like they appeared, in a puff of magic. Larger nasal flies, the result of more powerful spells being miscast, tend to live longer. All forms of the creatures are relatively harmless, save for the usual problems of having uncontrolled flying creatures in a potentially enclosed area.