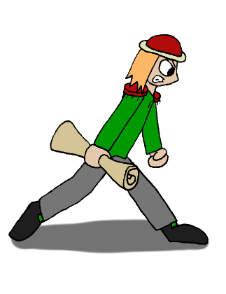 There are those that would call a job in their kingdom's castle to be cushy.

And in a way, those people are right. After all, you've got pretty well guaranteed shelter, for starters. When that means "well-protected, hardened stone" compared to "brick, wood, and straw" that most others outside the castle get, that's saying quite a bit. Plus, you can be assured that your home and workplace will be among the first defended in the event of an attack AND the first repaired in the event of disaster, not to mention the general improvements in cleanliness and sanitation, being in the middle of the nation's cultural and scientific center, better medical service from the clerics, and the ability to see the operations of the kingdom from the top-down if desired, plus the best shot at getting connections that would allow you to influence said operations. All in all, compared to the alternative manners of living, pretty good deal.

Carl, however, disagrees. As a royal page in the castle of the Landis Kingdom, he hates his job. He's also not afraid to let anyone within earshot know about this.

Well, besides the king himself. He's not going to say that to his face, of course.