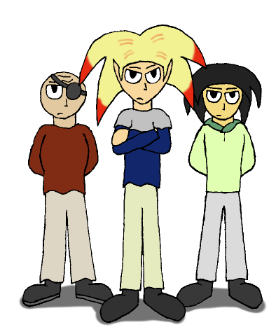 Though the Landis Kingdom Royal Army does have a somewhat questionable recruitment policy (re: frequent drafts), there are those who actually want to put in military service for their kingdom. Due to their general unwillingness, the draftees generally serve as low-level troops and/or cannon fodder, but the willing applicants tend more towards the kingdom's patrol squads, general-purpose teams for things more specialized than the low-level troops but less in-depth than actual military operations. The squad we're most concerned with is Sapphire Squad. Pictured here, from left to right, are Eddie, Cy, and Winslow, of said squad.

Eddie and Winslow are what most would term "the usual type" of male patrol squad troops. Well-trained, loyal to the crown, fierce fighters, perhaps not the brightest minds in the kingdom, and lovers of fine ales, decent ales, cheap ales, and the assorted wenches who serve said ales to them.

Cy, on the other hand, is anything but "the usual type" of patrol captain. An elf originally hailing from Yuulor Forest, Cy fled after the soul golem disaster. Filled with shame from giving up on his brethren (and not aware that he wasn't the only one who did so, and that everybody agreed this was the best choice all around, given the circumstances), he tried to pass himself off as a human and join the Landis Royal Army to hide from his past. Nobody really questioned this until a pub brawl accidentally revealed his elven lineage. Then it was largely a confusing matter of explaining why he was hiding in the first place, as nobody in Landis knows what goes on in Yuulor, but hey, everybody's had awkward moments like that in their lives.

Nowadays, having learned Yuulor Forest is alive and well, Cy, on his off days, tries to unravel just what happened out there that fateful day. He's got some ideas, but some things just aren't adding up...