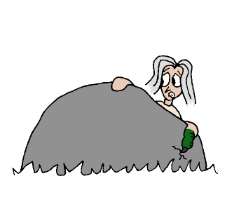 The Royal Army of the Landis Kingdom has always had a slight issue with retention. This, of course, is inevitable given the usual recruitment policies of the kingdom. Namely, rampant drafting at the first sign of greater-than-simple problems.

To this end, a vital part of the army is the team of New Recruit Overseers. For any new recruit's first few assignments, they are assigned an overseer to ensure they don't take any convenient opportunity to leg it all the way to Terakol until such time as they're determined to have their spirits broken enough that they probably won't run. Maybe. Vince is one of those overseers.

Or rather, he WAS one of those overseers. And he was a good one, too, not having lost a single recruit in his entire career, and QUITE proud of that fact. However, a seemingly-insurmountable disaster and a bit of miscommunication when leading Matt on his first (and, in the end, last) mission as a Landis scout led to him believing Matt to be dead along with his sister Alex. Given Vince wasn't even supposed to allow Alex to stay there, therefore meaning it was his own poor judgment that apparently cost the castle a recruit AND an innocent civilian, he fled to Terakol in a panic.

So nowadays he's a paranoid wreck roaming the dwarf nation, lamenting the fact that he threw his life away due to a stupid mistake on his part, made worse by the fact that he knows Matt and Alex are both alive, yet even if he returned with them, he still wouldn't be able to explain to the castle just where he's been all this time. And then, a run-in with Marzos left him with a disfigured, mutated finger of which he's not entirely certain he's in control.

The Dementia of Magic is hosted on RunawayNet. The whole thing's automated by AutoFox 2.5.5-css. So there.