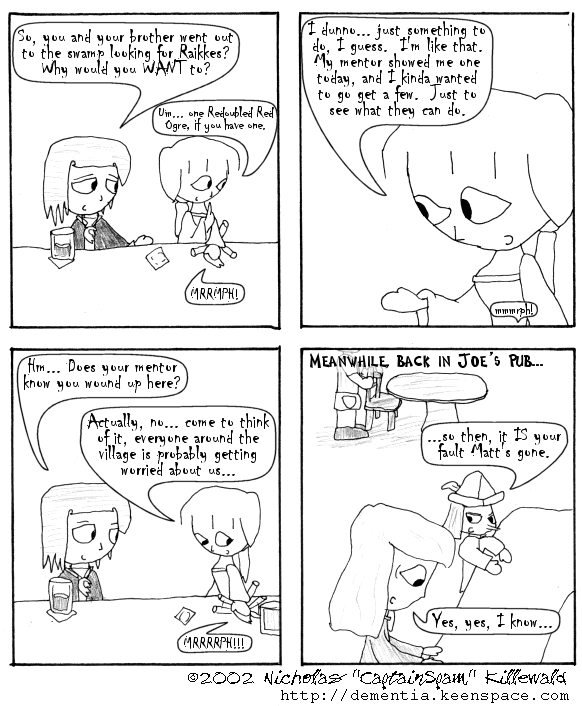 Addressing Howard's statement in the third panel: Though it may seem odd to ask if Salthalus knows where Alex and Matt are this soon after they went out, it is entirely feasible that a teacher would have some manner of knowing where his or her student is through magic means. However, Salthalus does not, so the point is moot.

As for Alex's drink order: The Red Ogre is a fairly potent human-made alcoholic beverage. The name comes from a particularly mean-spirited ogre who, as the legend goes, managed to master various deep aspects of controlling fire via magic. This, of course, is an outstanding achievement for ogres, who are not known for their concentration skills, much less for their ability to read. Like its namesake, it has a thick body, a very spicy appearance and feel, and can knock a person hard on the floor if they're not expecting it. Sometimes even if they are expecting it.

The Redoubled Red Ogre, however, comes from a bartending disaster one Rebirth Festival years ago (Equivilant to the New Year's Eve/Day holiday of most non-magic universes). A bartender in a city on the penninsula beyond the Southern Wastelands was running out of ingredients to mix Red Ogres. Being at least partially skilled in magic and getting more desperate as his patrons became more drunk, he attempted to make more by cloning the next few rounds of drinks. This worked for a while, until he mistakenly cloned a Red Ogre he already cloned once (He had a few set aside as "originals"; one "copy" got mixed in with that set by accident). Redoubling a clone almost always leads to a severe degregation in clone quality, and so some patrons got something that tasted quite, though not entirely, unlike a Red Ogre.

This Redoubled Red Ogre had a medium body, a tart taste where its original had spice, but otherwise light and alcohol-free. Needless to say, the bartender did not survive the night.

However, solely by the grace of luck, one warlock, an elf named Heshvan, had attended the party. Mages, on the whole, do not take to drinking alcohol. Almost any form of magic requires deep mental concentration, something very hard to achieve, if not impossible, while under the effects of alcohol. Thus, Heshvan had not partaken in the drinking festivities of the majority of the bar. He did see the bartender's desperation, however, and watched him carefully as he cast spell after spell to keep his drink supply up.

Heshvan was getting worried as the spiritual strain of cloning the drinks began to take its toll on the bartender's coordination and concentration. Knowing how dangerous a rowdy crowd can be, he hoped that he would eventually become unable to form the spells before he began screwing up the drinks. In fact, he was praying to the goddess of Mercy to hear a relieving "THUNK" noise and see Nasal Flies start to come out of the back room. They never came.

The bartender was getting clumsy as the spells began to tax on his mind. He cast the cloning spell on some already-copied drinks and served them. He never noticed the patrons in the bar slowly regaining sobriety and graduating to mean hangovers (the fourth reason the drink owes its namesake to the Red Ogre), and thus never saw the mob coming.

Heshvan, out of pure curiosity, took a sip of one of the redoubled drinks while everyone else was busy pummeling the snot out of the bartender. The taste took him in immediately; the tart zing to it caught the good side of his tastes. He thus snuck a couple drinks out of the bar as the mob appeared to be emerging from the back and still a bit miffed.

Being familiar with the mixing of various potions, Heshvan attempted to duplicate the taste of the drink without the risky and fairly failure-prone method of actually redoubling the original. He succeeded in doing so (Though everyone has to take his word on this) and quickly entered the bartending business. Last anyone heard, he now lives the high life in the lands beyond the Great Ocean.

The Redoubled Red Ogre is a popular drink among mages, given that it is one of the few sociable alcohol-free drinks commonly avaliable. Depending on who mixes it, it most commonly has a tart taste combined with a slightly sweet aftertaste. Some manage to mix it with a slight amount of alcohol, though most keep it true to the original and keep it alcohol-free. Although Alex does partake in a drink now and again, she has no greater fun than when she's casting spells, something she can't do when inebriated; thus, she usually keeps to Redoubled Red Ogres if she plans on drinking at all.

Regarding the final panel: Salth knows Alex well enough to know that she most likely went off in search of Raikkes and is getting into trouble right now. That's just the kind of girl Alex is.

Mad props to Cobra, who gave me the name of Heshvan, and Howard Tayler, whose rambling explanatory notes in Schlock Mercenary inspired things like this in my comic.